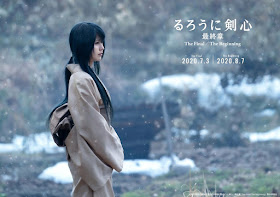 Japanese actress Kasumi Arimura has been confirmed to join the cast of the upcoming Rorouni Kenshi: The Final Chapter movie where she will portray the role of Kenshin's wife, Tomoe Yukishiro.

For those who have no idea who Tomoe is, Tomoe was the fiancee of Kiyosato Akira, the bodyguard of a high ranking samurai whom Kenshin, as Hitokiri Battosai, killed. Kiyosato was also the one responsible for Kenshin's facial scar. And during here time tracking Battosai, Tomoe fell in love and married the man who murdered her fiancee and soon after, became a casualty herself, leaving Kenshin with the X mark that would symbolize his oath to never take a life anymore. She is also the sister of Enishi.

As for the actress herself, this is not the first time that she had work with Takeru Satoh as she had previously worked with him in the movie "Nanimono". Rorouni Kenshi: The Final Chapter will premiere in Japanese theaters this July 3rd and August 7th of 2020.
Gaiatron at Thursday, March 19, 2020
Share