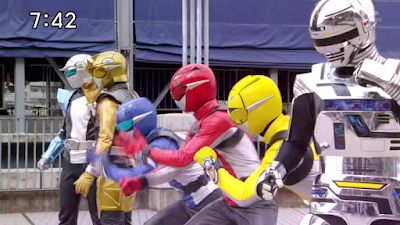 Prepare for the upcoming new episodes of Power Rangers Beast Morphers season 2 as it is confirmed that we will be having 2 (yes you read it right!) team-up episodes! Read the description after the break but be prepared for spoilers!
Episode 9 "The Evox Snare" - Grid Battleforce shuts down the Morph-X towers to lure Evox into a trap.Episode 10 - "Intruder Alert!" - The Rangers receive a strange message from outer space warning of an impending threat.Episode 11 - The Rangers do everything they can to help their new ally return home.
Episode 12 - A hasty decision by Zoey puts an old friend in danger.
Episode 13 - In an epic battle, the Beast Morphers team up with the Dino Thunder, Dino Charge, and Mighty Morphin Power Rangers to defeat the newest member of Evox's team.
Episode 14 - Nate is reunited with his do-gooder parents, who offer him a compelling and difficult choice.
Episode 15 - Ravi and Roxy's anniversary hits a major snag when a misunderstanding gets out of control.
Episode 16 - Nate and Steel accidentaly swap bodies!
Episode 17 - When Zoey accidentally ruins her brother's chances for a scholarship, she’ll do anything to make it right.
Episode 18 - Devon falls victim to a bad influence, which affects his relationship with Cruise.
Episode 19 - Nate makes a horrifying discovery and must rely on the wisdom of an ally to help him work through it.
Episode 20 - Evox finally executes his master plan, and the Rangers must do everything they can to stop him, even potentially sacrifice one of their own.
Episode 21 Boxed In - The Pan Global Games have arrived in Coral Harbor, but Ranger duties prevents the teens from attending any of the events.
Episode 22 - Evox decides to add a new villain to his team and commands his minions to find the evilest villain of all time.

And that's it folks, looks like we will be having an american version of Space Sheriff Gavan just like Sekai Ninja Jiraiya/Sheriff Skyfire in  Power Rangers Ninja Steel. Just wished that it was VR Trooper's Ryan Steel in an all new armor which makes more sense.